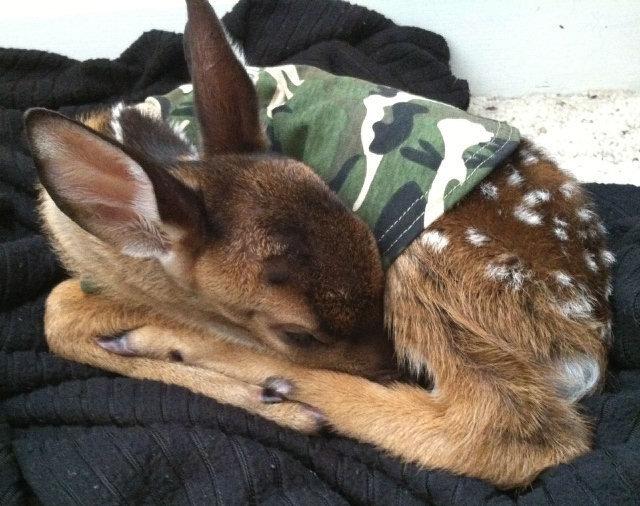 A fawn that lost its mother sleeps peacefully in its camouflage clothes at Coastal Critter
12:06 pm on Tuesday May 28, 2013 | Posted by Casey_Grim
Nonprofit works to save and rehabilitate animals of all kinds in the Myrtle Beach area

I got a question for you: what do a gooes with a broken wing, a seagull that is wrapped in fishing line, an abandoned fawn, a little of unwanted puppies and old dogd without homes have in common?

The answer is that they all have been brought to the attention of Tia VanFossen of gle which is a nonprofit rescure rehabilitate and release animal shelter located in Socastee.

VanFossen along with the volunteers who help here are among the many people along the Grand Strand area that work tirelessly to save animals and many of them network to find homes for dogs, cats as well as other animials. Coastal Critters works with other local shelters to find homes as well as lost pets and then attempt to indentify found animals and return them to there owners.

VanFossen also works with the United States Department of Agriculture and the Department of Natural Resources to save wild birds and animals, that are then  rehabilitated and released back into the air or to preserves where they are allowed to live out their lives.

Not all of the animals that go to Coastal Critters can be saved, but everyone there tries their best to help them survive. VanFossen says:

Sometimes you do lose them. I’ve lost a fawn before and Last year, we saved 65 animals, and this year we are going to surpass that by far.

Through a program at Coastal Critters’  called Senior to Senior program, older rescued dogs are matched with seniors.

Head over to The Sun News to read the entire story